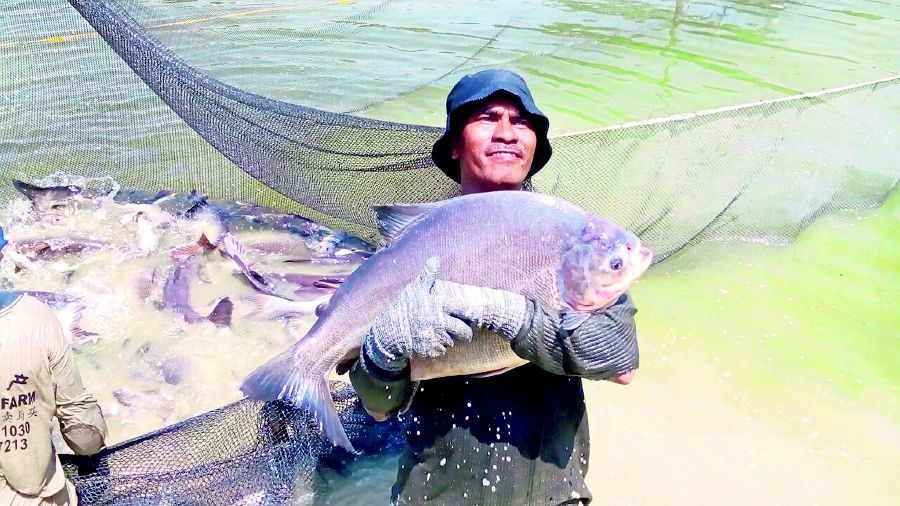 KUALA TERENGGANU: PIRANHAS, African catfish, garfish, pirarucu, peacock bass, Chao Phraya high fin giant catfish and tilapia: these are all food fish in their countries of origin and are found in abundance in rivers, lakes and swamps, or bred in ponds in aquaculture projects.

Most of these fish species thrive in rivers and lakes many times bigger and deeper than the longest river in Malaysia.

In their natural environment, these fishes grow to monstrous sizes.

“All the fish mentioned above are carnivorous and predatory, including the tilapia which is an invasive species.

“Any minnow or fish that fits in their mouths will become prey and their voracious appetite helps them to grow to enormous sizes,” said Universiti Malaysia Terengganu (UMT) ichthyologist Dr Amirrudin Ahmad. These fish are native to the Amazon river (6,992km-long), Nile (6,893km), Congo (4,700km) and Mekong (4,350km).

“The short span and narrow width of our rivers make it easy for predatory fishes to hunt for smaller fish like lampam, kelah, sebarau, kaloi, snakeheads (haruan, toman and bujuk), as well as the smaller Malaysian Clarias species (catfish),” said Amirrudin.

He said with the existence of these predatory fishes in local rivers and the proliferation over the years, it would not be long before indigenous species became depleted, or in the worst-case scenario — extinct.

“Although there are no records on when these fishes were released into the rivers, it is believed that some of these predators have been set free by hobbyists since the late 1980s.

“After such a long period, there is concern over the loss of aquatic biodiversity due to the introduction of these predatory and invasive species.

“A good example is the invasion of the red claw crayfish in Johor rivers,” he said.

As more of these predatory and invasive species being landed by anglers, it speaks volumes on the declining population of indigenous species.

“The Malaysian Quarantine and Inspection Services (Maqis) needs to tighten its supervision of live fish imports.

“Equally important, the live fish traders must be more responsible by providing the list of their imported fish to the Fisheries Department,” he added.

The next step is honesty in declaring the imported fish as true to the invoice.

The Fisheries Department and Maqis can also deter the import of banned species by explaining the laws and the penalties to importers. They should not entertain “I don’t know” excuses to escape punishment. Amirrudin said fisheries inspectors must be well-informed about banned species and able to identify the fish at first glance and at its juvenile stage.

Local fish shops and hobbyists also must be educated on the prohibitions.

Local fish shops, especially, must be required to display the list of banned fish at their outlets.

“A hotline, or toll-free telephone number to the Fisheries Department should be displayed as big as the ‘No Smoking’ signage in the shops to allow the public to report sales of banned species,” he added.

He said fish farms must not be allowed to breed certain species, especially breeders who grew the fish in cages along rivers and in lakes, because most of the catfish species from the Amazon rivers, for example, could grow to monstrous sizes.

“In some years, we hear reports of fish cages being damaged and African catfish escaping into the rivers in Terengganu, Pahang and Perak. Unless a foolproof method is found, these fish should be bred in ponds,” he added.

ENTHUSIASTS CAN PLAY A ROLE

Any predatory foreign species caught must not be released back into the river. Predatory fish such as pirarucu (Arapaima gigas), alligator gar (Lepisosteus), peacock bass, Chao Phraya high fin giant catfish (Pangasius sanitwongsei) and red tail catfish (Phractocephalus hemioliopterus) have been reeled in by anglers in most major rivers in the country.

When such fish snaps up the baits from rods and lines, it reflects a horrifying reality that the population in these rivers have grown.

And the sizes of the peacock bass, red tail catfish and Chao Phraya high fin catfish which look like the local patin, commonly indicate that these predators have been in the rivers for more than two years.

Religious and cultural releases (bayar nazar) of African catfish, which can grow to an enormous size, by the community should be replaced with the release of indigenous species such as lampam, baung, kelah or the smaller local catfish.

“The Fisheries Department should conduct a careful study on whether a fish species is safe for the biodiversity before introducing it for economic purpose.

“What use is development and intense food production if they cause the extinction of natural assets?

“When the natural resources are damaged by aquaculture or development, it can only be called destructive,” Amirruddin said.

State Fisheries Department director Zawawi Ali said hobbyists generally dumped predatory fishes into rivers when their pets could no longer fit into their tanks or when they lost interest in the hobby.

“Feeding big fish is costly. This may also be another reason they have to dispose of their pets,” he said, adding that the problem would arise when hobbyists imported predatory fish species without verifying with the department whether the species was banned.