The Indochinese leopard (Panthera pardus delacouri) is a genetically distinct subspecies that historically occurred throughout mainland Southeast Asia, but might have experienced recent declines in numbers and distribution. This study aimed to determine the current distribution of the Indochinese leopard, and estimate its population size, by reviewing data from camera trap and other wildlife surveys conducted during the past 20 years. Our results showed the Indochinese leopard likely now occurs only in 6.2% of its historical range, with only 2.4% of its distribution in areas of confirmed leopard presence. The leopard is extirpated in Singapore, likely extirpated in Laos and Vietnam, nearly extirpated in Cambodia and China, and has greatly reduced distributions in Malaysia, Myanmar, and Thailand. There are plausibly only two major strongholds remaining, which we consider priority sites: Peninsular Malaysia, and the Northern Tenasserim Forest Complex. We also identified a small isolated population in eastern Cambodia as a third priority site, because of its uniqueness and high conservation value. We estimate a total remaining population of 973–2503 individuals, with only 409–1051 breeding adults. Increased poaching for the illegal wildlife trade likely is the main factor causing the decline of the Indochinese leopard. Other potential contributing factors include prey declines, habitat destruction, and possibly disease. We recommend a separate IUCN assessment for the Indochinese leopard, and that this subspecies be classified as Endangered. Our findings provide important information that can help guide where conservation actions would be most effective in preventing the extinction of this subspecies. 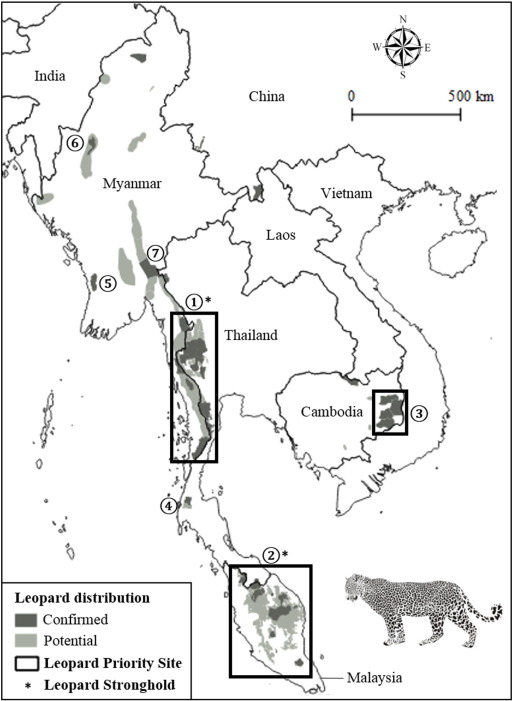