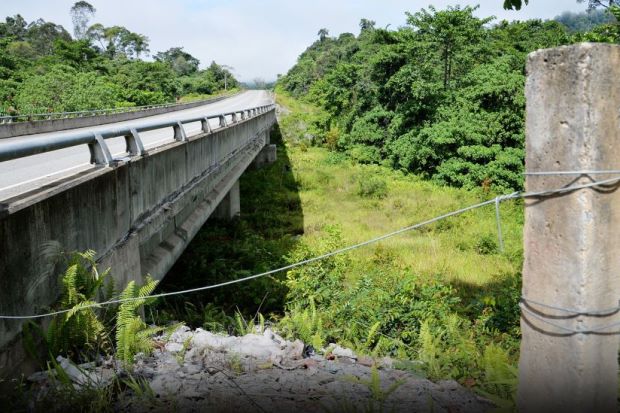 PETALING JAYA: The building of highways that cut across important habitats of protected animals and plants has opened doors to poa­chers stealing the country’s priceless treasures, said a researcher.

Caution ahead: Elephants crossing the East-West Highway on the Perak side . — Photo courtesy of MNS/ Yeap Chin Aik.

Universiti Malaysia Terengganu’s Kenyir Research Institute Assoc Prof Dr Reuben Clements said that when he did his research on orang asli in Perak, for example, there was evidence of high poaching pressure in forests beside the 203km-long East-West Highway bisecting the Belum-Temengor Forest Complex.

“People can just park their vehicles at the side of the road and go into the jungle and hunt and it is difficult for the authorities to monitor their movement,” he said at a talk on roads, wildlife and orang asli organised by the Centre for Malaysian Indigenous Studies in Universiti Malaya.

Dr Clements, a conservation scientist, said the poachers included Malaysians and foreigners, suspected to be from Vietnam and Cam­bodia.

“The foreign poachers have been stealing highly priced gaharu wood from our forests and selling them at a high price,” he said.

According to Dr Colin Nicholas, coordinator for the Centre for Orang Asli Concerns, the price of gaharu will double once it reaches foreign markets such as those in Singapore.

He said the poachers were also competing resources with the orang asli.

Dr Clements, who currently conducts his research in Kenyir, Tereng­ganu, said Kenyir was considered an important mammal conservation area as it contained almost all the mammal species documented in peninsular Malaysia but was also divided by state road T156 and provided access to many poachers.

“Recent studies show that Be­­lum and Kenyir are home to endangered species such as pangolins and tigers, which are highly sought after by poachers for traditional medicine and game,” he added.

In view of this, Rimba, which Dr Clements co-founded, recently made a video highlighting the im­­portance of conserving endangered species such as tigers and sam­­bar deer from an Islamic perspective.

“It is important to avoid building more roads in important forests such as Belum and Kenyir,” the sultan said.

Dr Clements said from his re­search involving 144 households from 10 villages in Belum-Temen­gor, most supported the presence of the highway and 65% supported construction of additional roads to their villages even though the use was low (2%-28%).

He said when constructing a road, the authorities should consult the orang asli as those living nearer to it support its building while those living more inland did not.

He said those living in Belum did not want more roads as they bring many visitors and diseases.

To prevent unregulated development along highways which cut through ecological linkages in the Central Forest Spine, they should be gazetted as protected areas, he said.

If a road were to be built in an important wildlife habitat, Environ­mental Impact Assessments should be made mandatory and the Public Works Department should hold consultations with the Department of Wildlife and National Parks and the local communities, Dr Clements said.

Source and Link : The Star Online