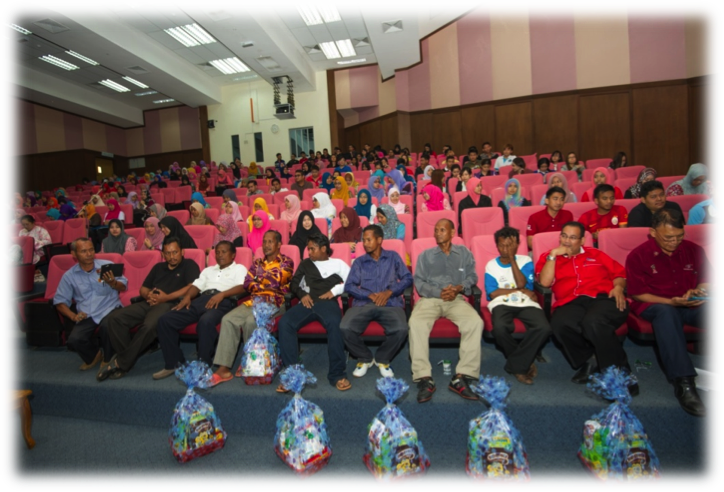 A two-hour seminar under the broad theme “Centre for Socioeconomic Development Research Seminar Series 2014” collaborated with the Pejabat Tanah dan Daerah Hulu Terengganu was conducted by the Research Programme of the Lakeshore Community on 12 May 2014 at Auditorium Mahyuddin, PPPPM, UMT.

The main purpose was to obtain an in-depth knowledge and understanding of the attitudes and acceptance of indigenous communities in Kampung Sungai Berua on the idea of Kenyir Lake as a Geopark. Attended by about 200 participants including the Orang Asli, Penghulu, Assistant of District Officer from Hulu Terengganu, lecturers, students and officers of government agencies, the seminar also aimed to expose UMT researchers and members about current issues and challenges faced by the indigenous communities. The speaker for the seminar was Associate Prof. Dr. Ramle bin Abdullah, whois a lecturer at Universiti Sultan Zainal Abidin (UniSZA) and an expert on the socioeconomic studies of the Semak Beri as well the Bateq communities at Sungai Berua, Hulu Terengganu. He spoke on “Socio-Economic Development Scenario for the 21st Century: Issues and Challenges Facing the Orang Asli of the Kenyir Lake”.

The CSD Research Seminar Series 2014 is expected to help the researchers and the agencies involved directly and indirectly with the communities.This is especially at the level of formulation of any programs or development projects that affect the communities. Project development,either physically and spiritually, if it is carefully planned and taking into account the issues and challenges they face, these will help bring this community into the betterment of their socio-economy. Overall, the programme was successful in achieving its objectives. It was a kick start to develop a closer relationship among the community, the concerned agencies and UMT.